Here is a collection of pictures of the EE/CIS Computer Lab taken back in 1988-1990. These images were scanned from prints. 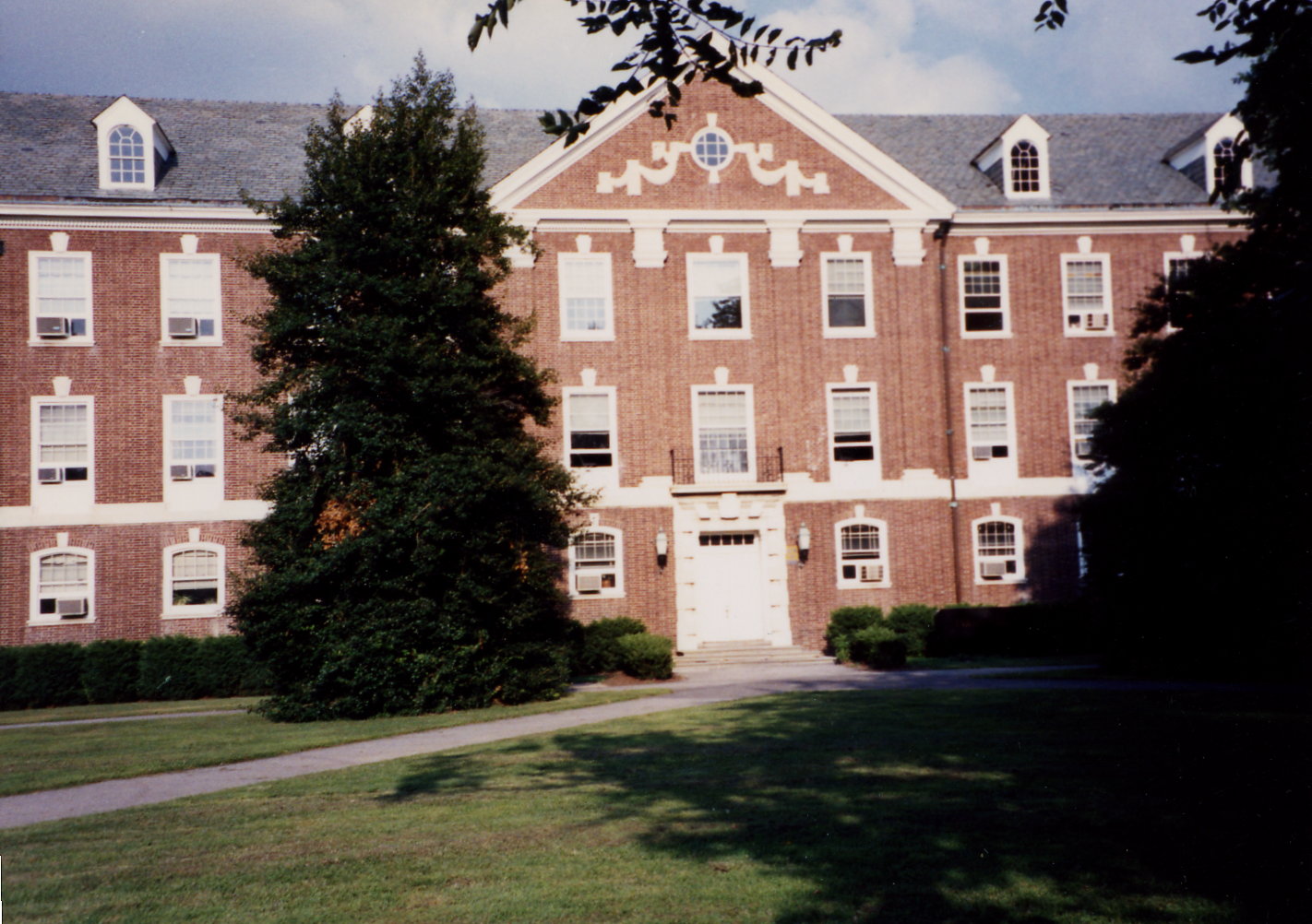 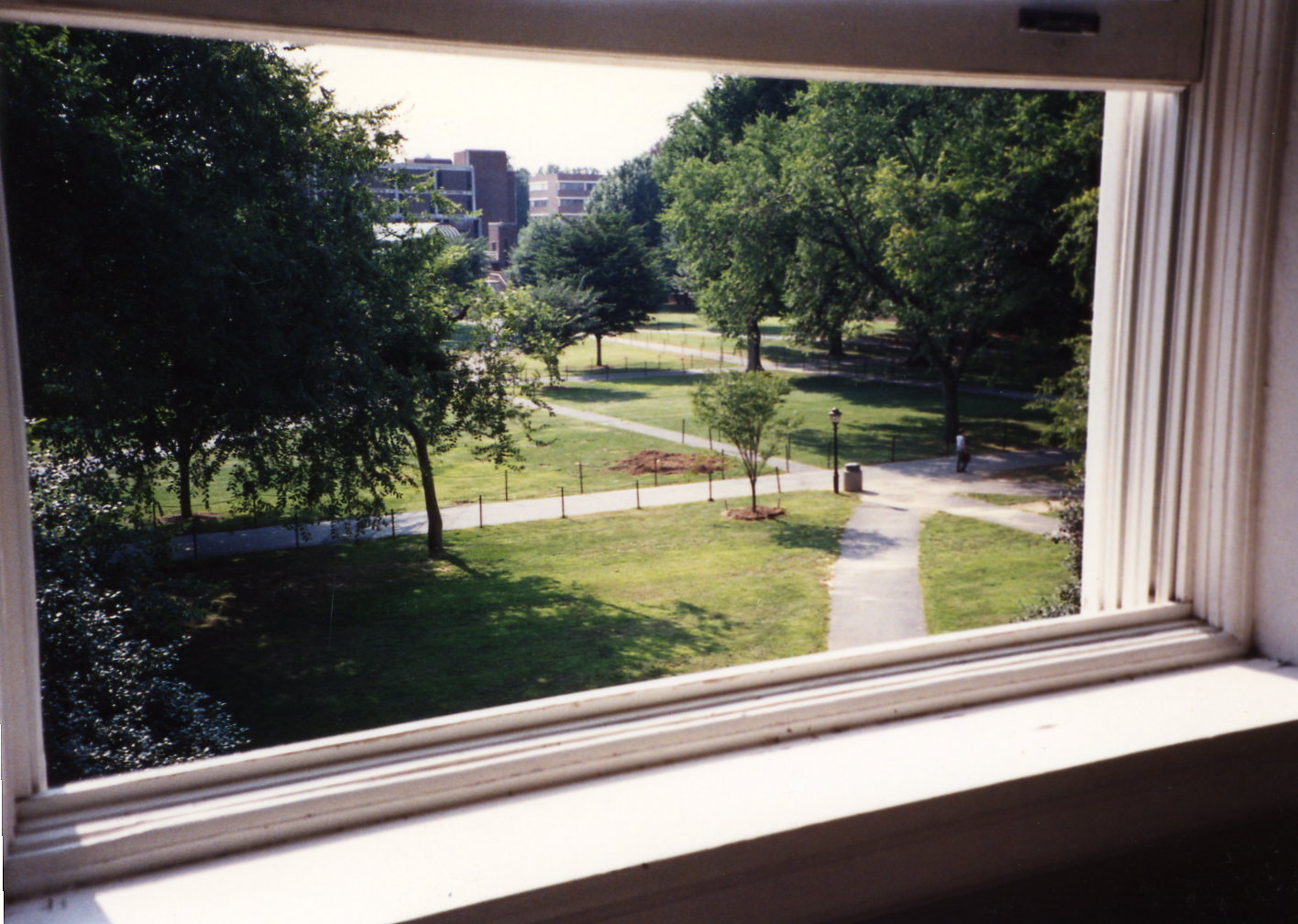 The lab consists of three rooms: 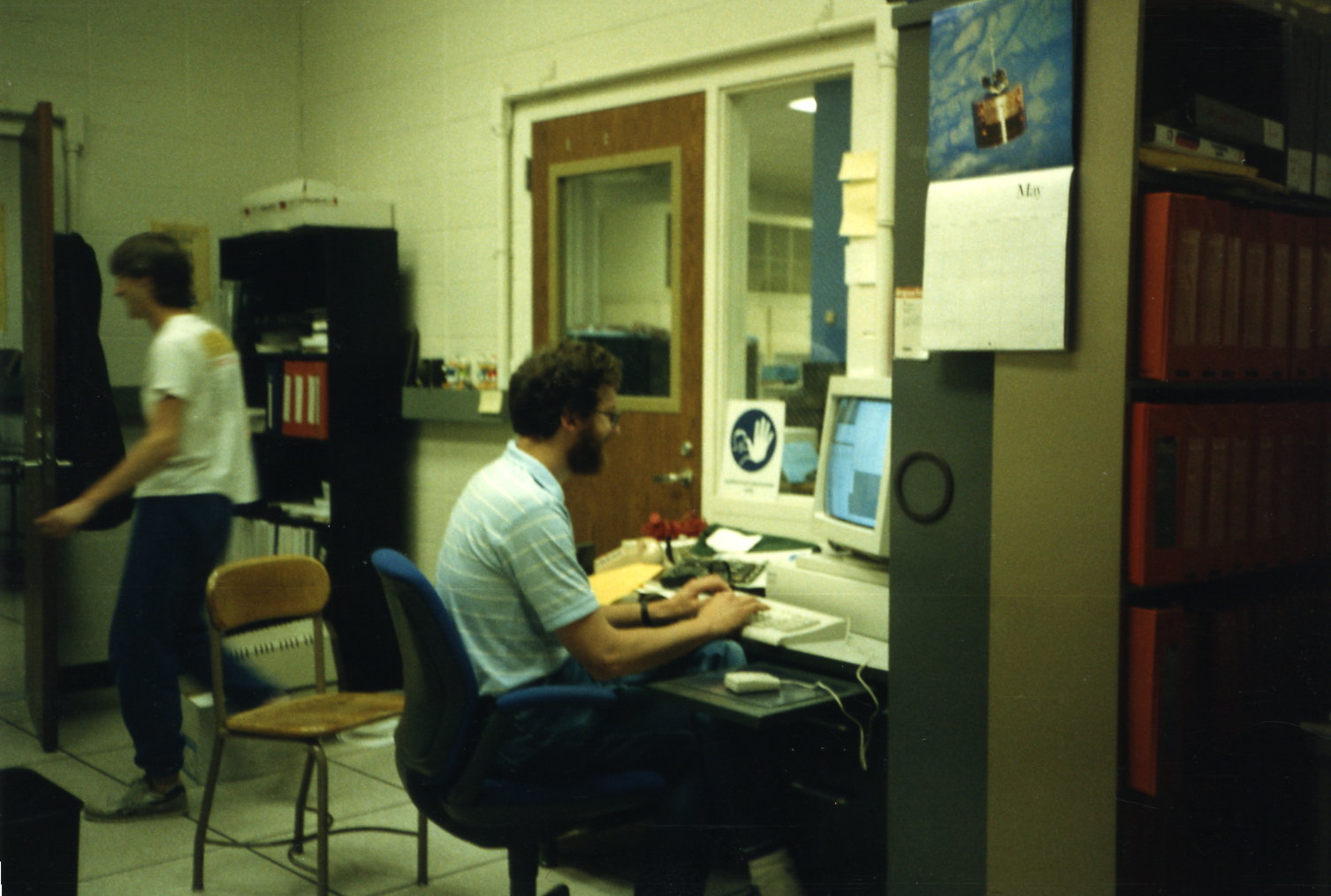 View of Evans 113 from the outside door looking towards the machine room. That’s Jeff Law (CIS undergrad lab staff) on the left and Ron Minnich (EE grad lab staff) seated on the right. Jeff later would join Cygnus/Red Hat and help maintain the GCC compiler. Ron moved to UPenn with his advisor, finished his PhD, and currently does research on cluster computing. Ron also started the LinuxBIOS/coreboot project. This picture and the one below it were taken June 3, 1988. 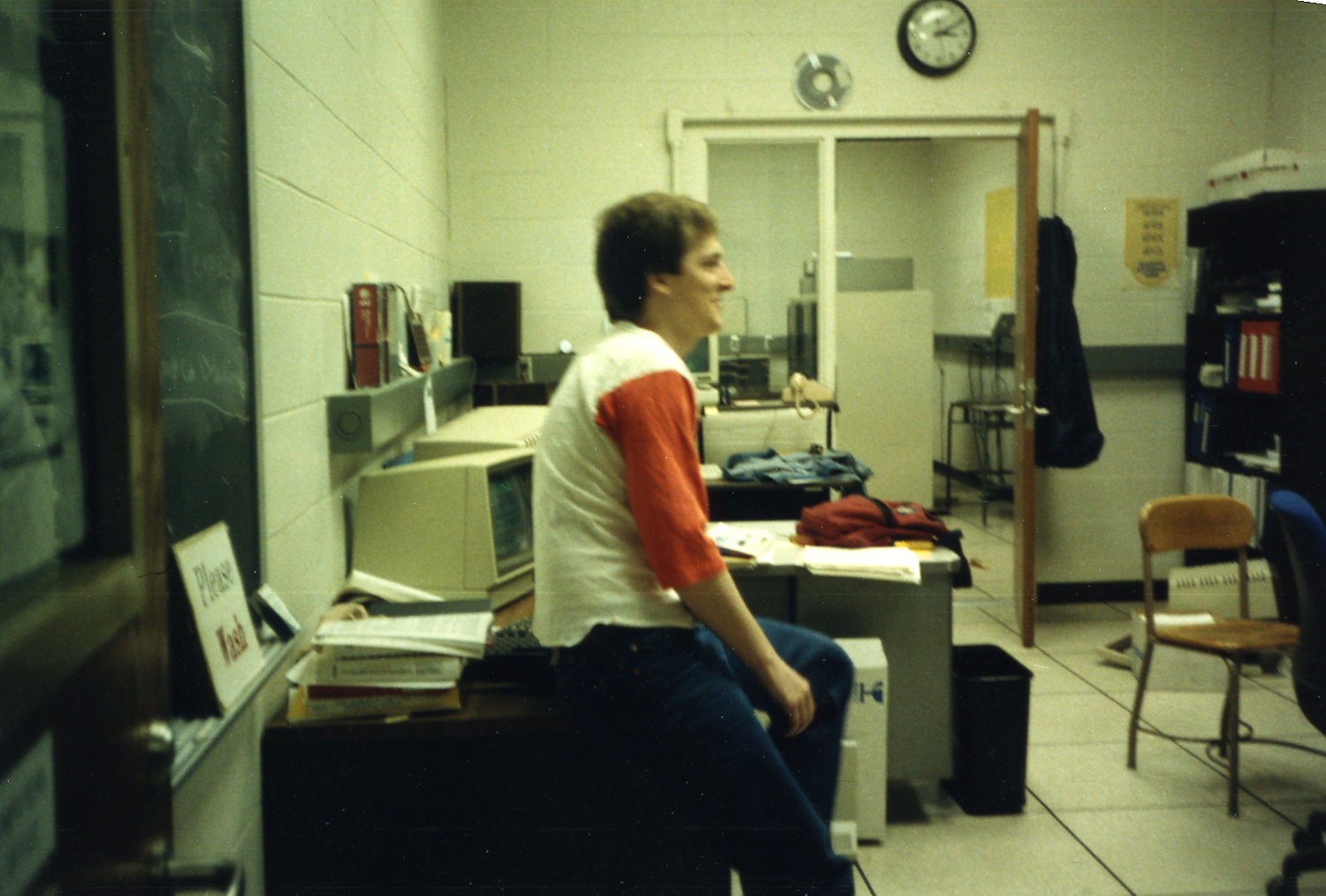 Looking through Evans 113 into the I/O room (134). That’s Chuck Cranor (EE undergrad lab staff), sitting on the desk talking to Ron Minnich (off screen). There’s an old Z29 (zenith) terminal behind me, and a Concept AVT terminal on my desk (the one behind the desk I am sitting on). You can see the tape drives in the I/O room through the open door. 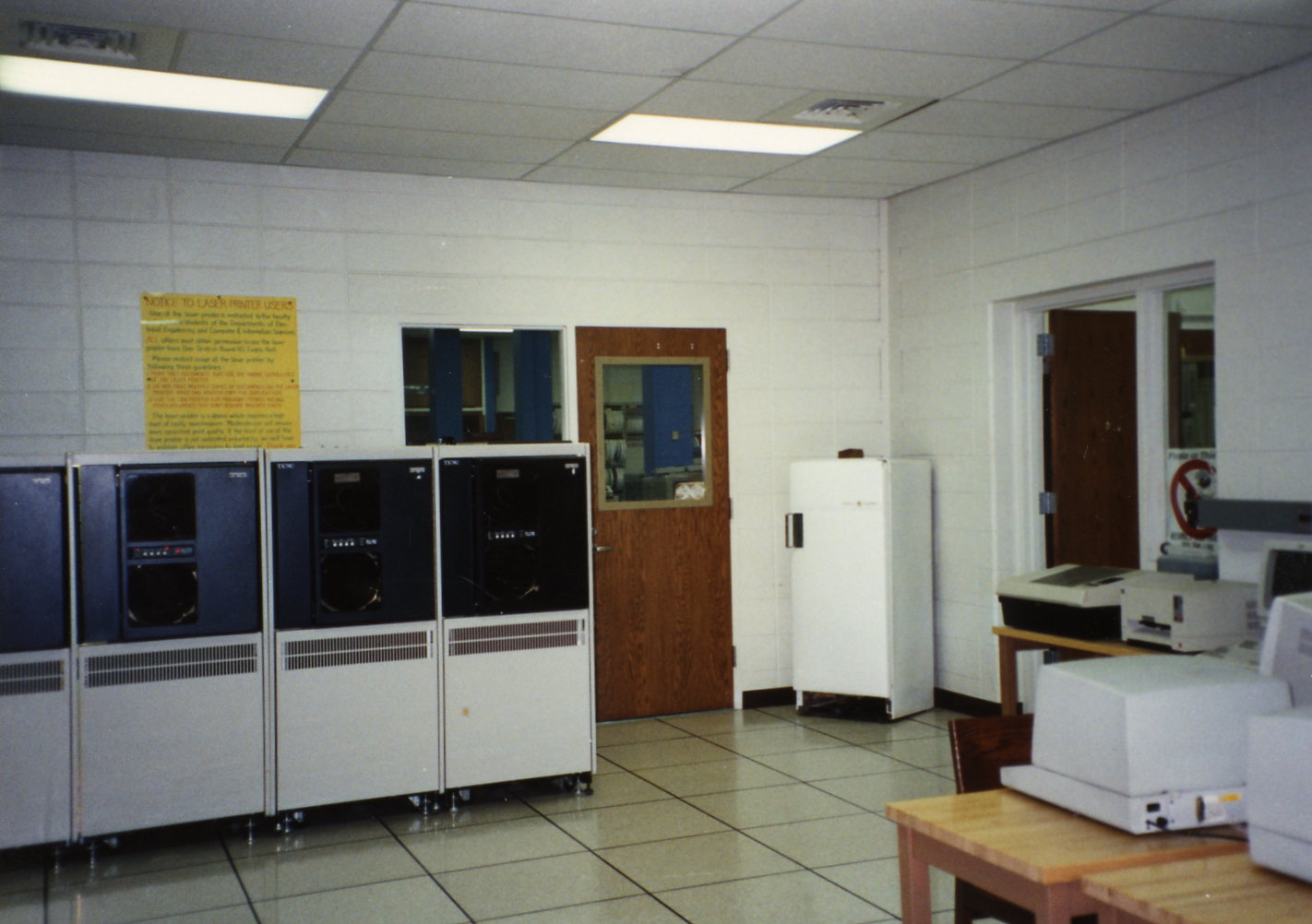 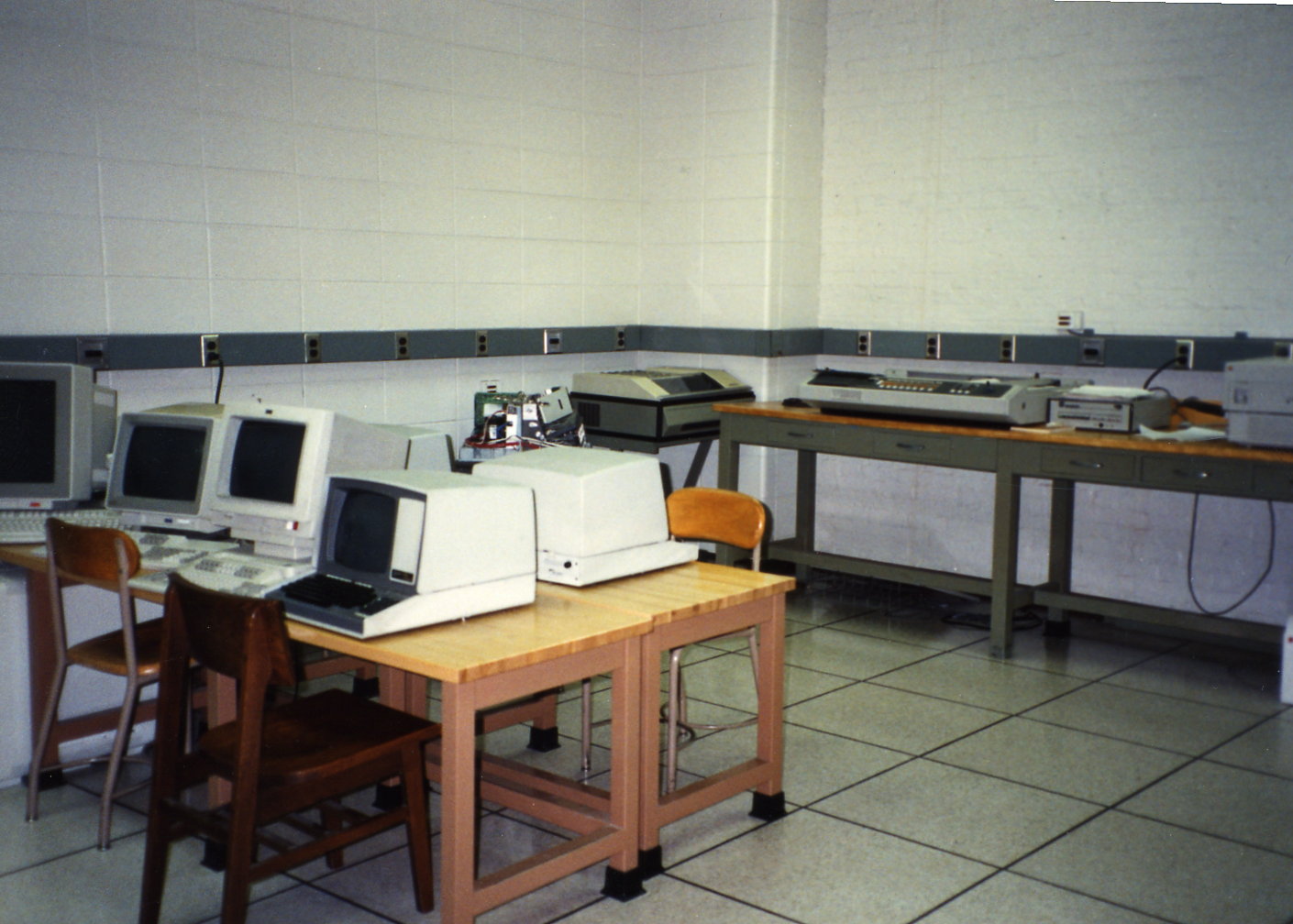 The public access terminals in the I/O room, with some printers in the background. The terminal closest to the camera is a Z19 (zenith). 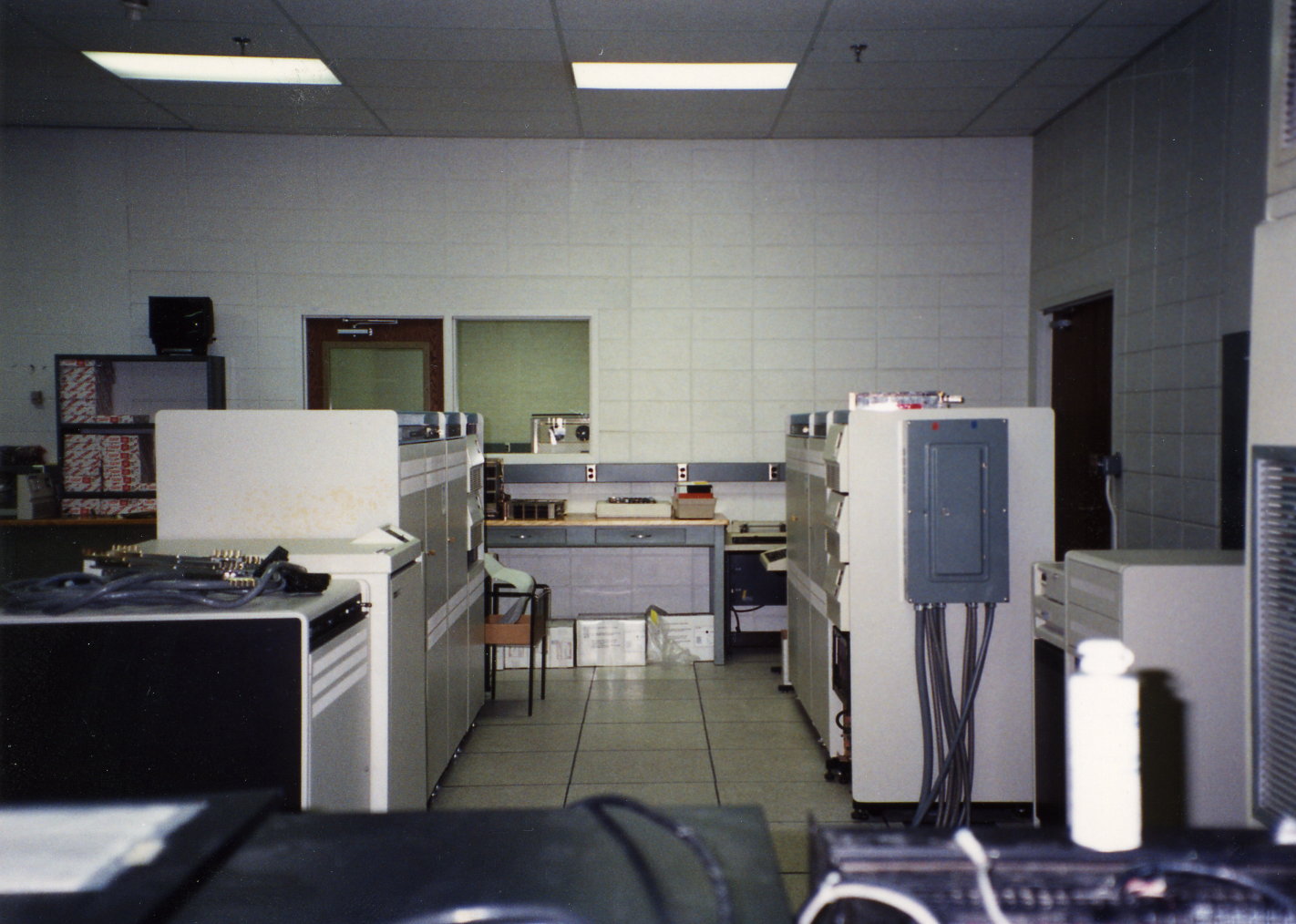 On the left row, closest to the window, we have louie.udel.edu a VAX-11/780. Louie was the main lab email relay, USENET news server, and DNS server for the lab. Next to louie is it’s RP07 disk drive (500MB, looks like a washing machine) and a non-operating VAX-11/750. Huey.udel.edu is the VAX-11/780 on the right row. Huey was home for most of the EE faculty, staff, and grad students. Both louie and huey had Fujitsu Eagle drives in VAX cabinets next to the CPU. 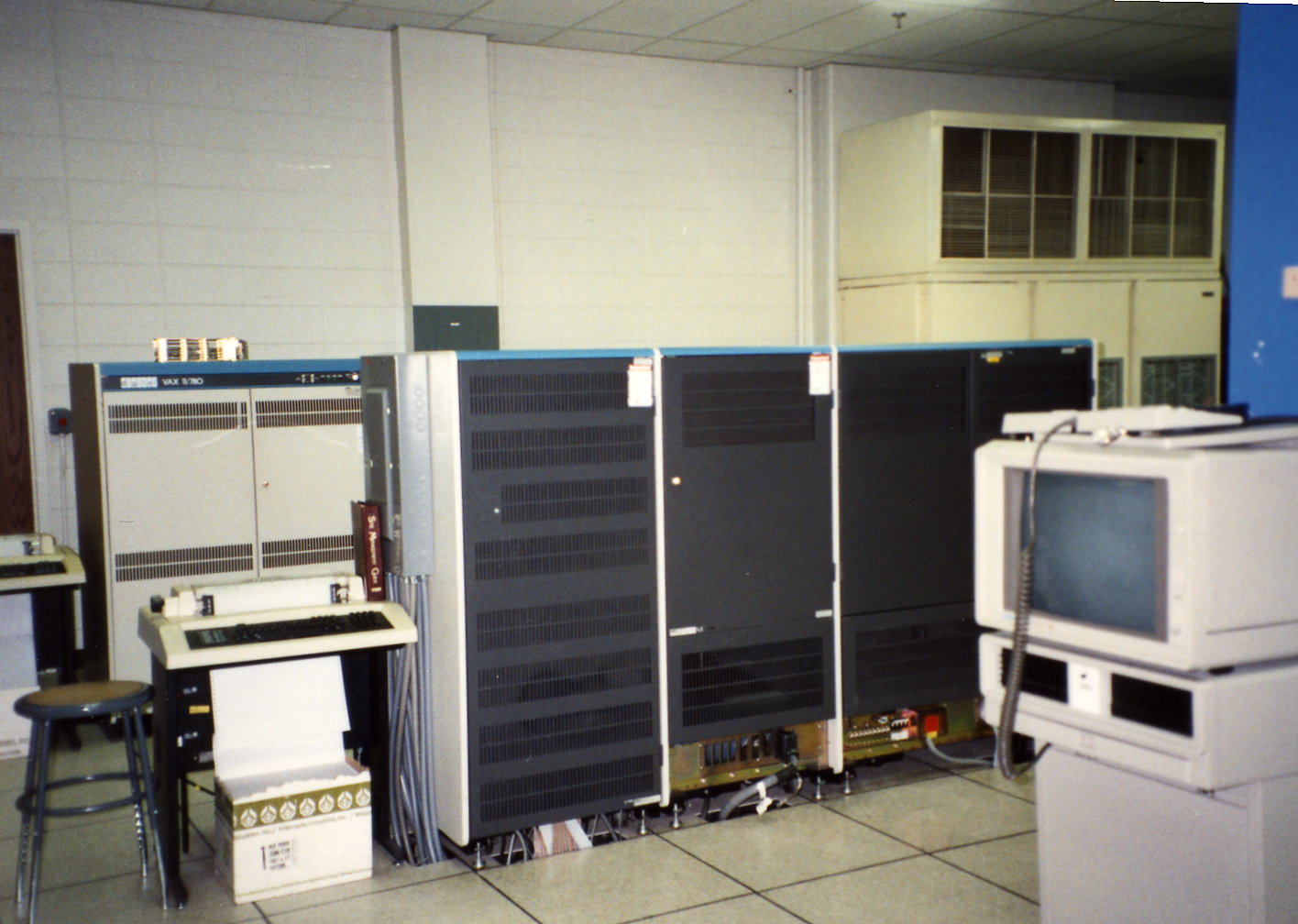 Here is a shot of huey.udel.edu (far VAX) and the back of louie.udel.edu (plus its console). Notice how louie.udel.edu’s cabling (Massbus, power, etc.) was routed under the raised floor. This picture was taken looking left from 113’s door into the machine room. 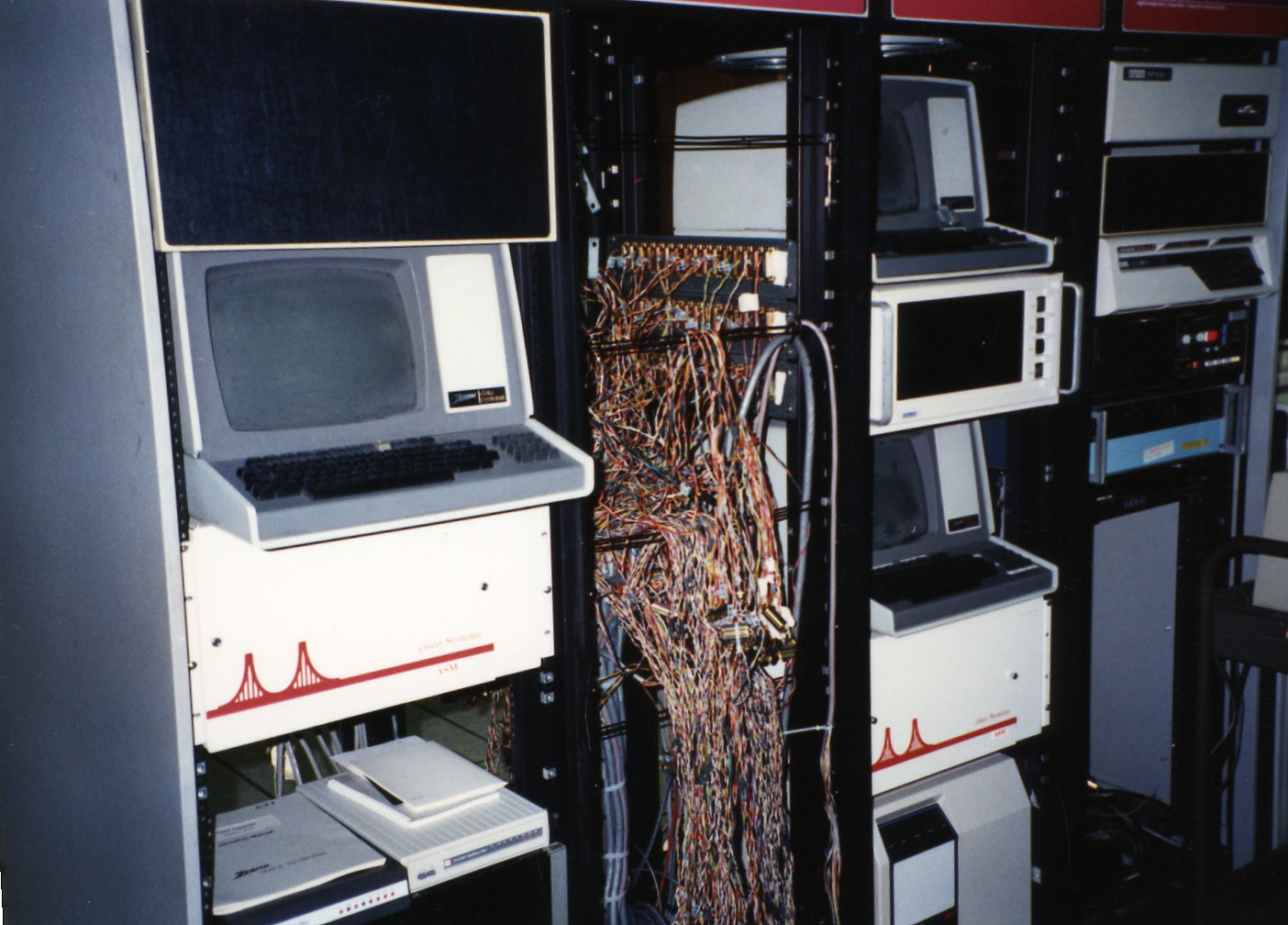 This is the networking rack in the back of the machine room. The rack on the left contains a cisco terminal server with a Zenith z19 console on top (and you thought cisco only made routers!). Under the cisco is a small modem bank for use in case the campus network was having problems.

The next rack over contains the DB25 endpoints for all the serial connectors in Evans, Smith, and duPont Hall. We plugged these into the cisco terminal server as needed. I bet it took a long time to terminate all those serial cables!

The next rack after that contains another contains a Proteon router (for the campus network) and another cisco terminal server. The rack on the far right belongs to Dr. David Mills and contained his PDP-11/LSI-11 systems and related equipment that were used with his network time sources (for the NTP protocol). We ran an antenna wire all the way from this rack to the unfinished attic of the front part of Evans Hall in order for us to receive a good clock signal! 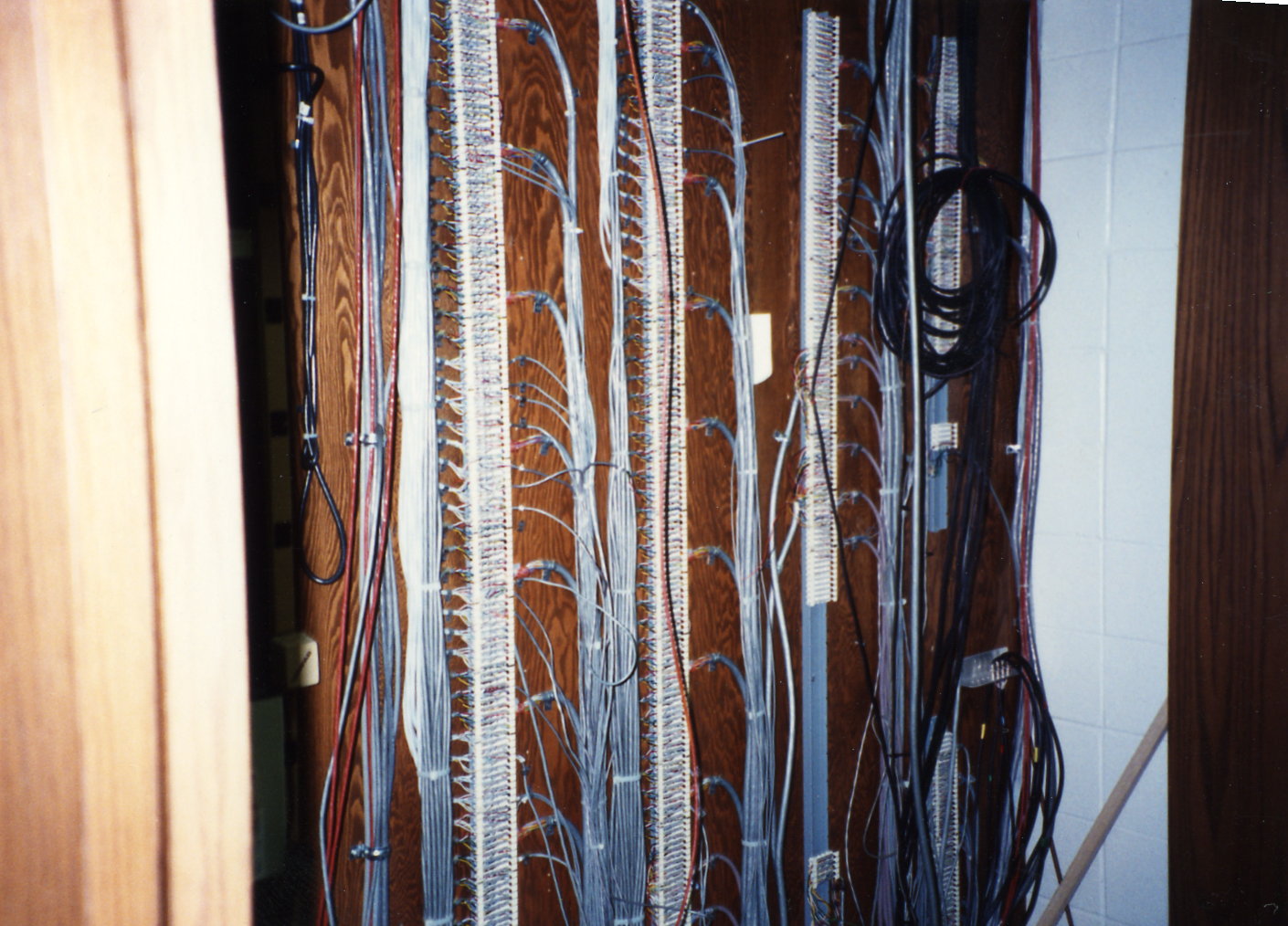 This is the wiring closet directly behind the network rack. It contains patch panels for all the serial connectors shown in the previous picture with the cisco terminal server. It also had a few phone lines and ethernet transceiver cables in it as well (connected to a couple of DELNIs). 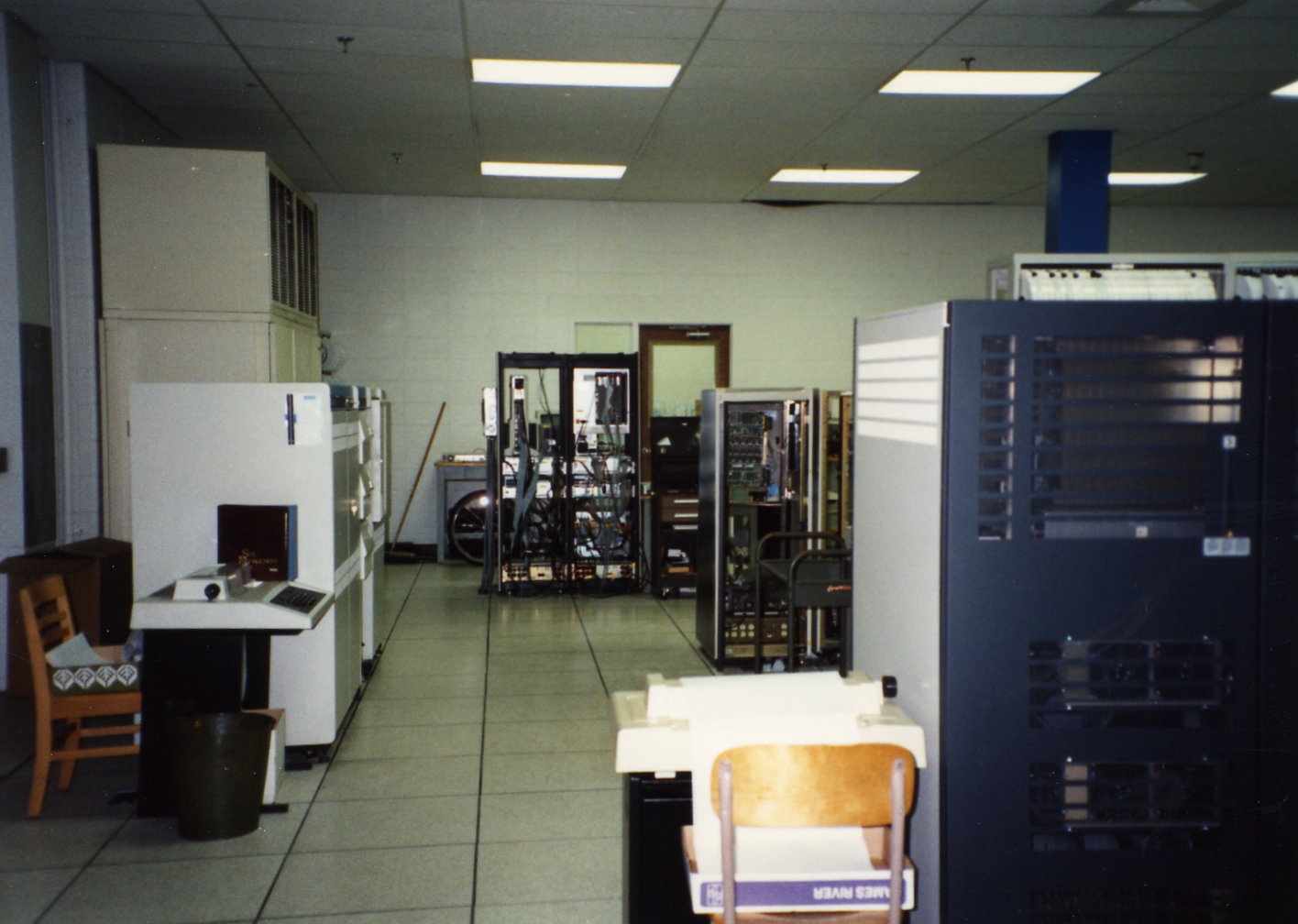 Here is the view from the the back of the machine room looking towards 113. On the left side is dewey.udel.edu, a VAX-11/780 that was home for most of the CIS faculty, staff, and grad students. In the middle at the far end is snow-white.ee.udel.edu, a SUN file server for some EE lab machines. On the far right is the back of shiva.cis.udel.edu (see next picture). 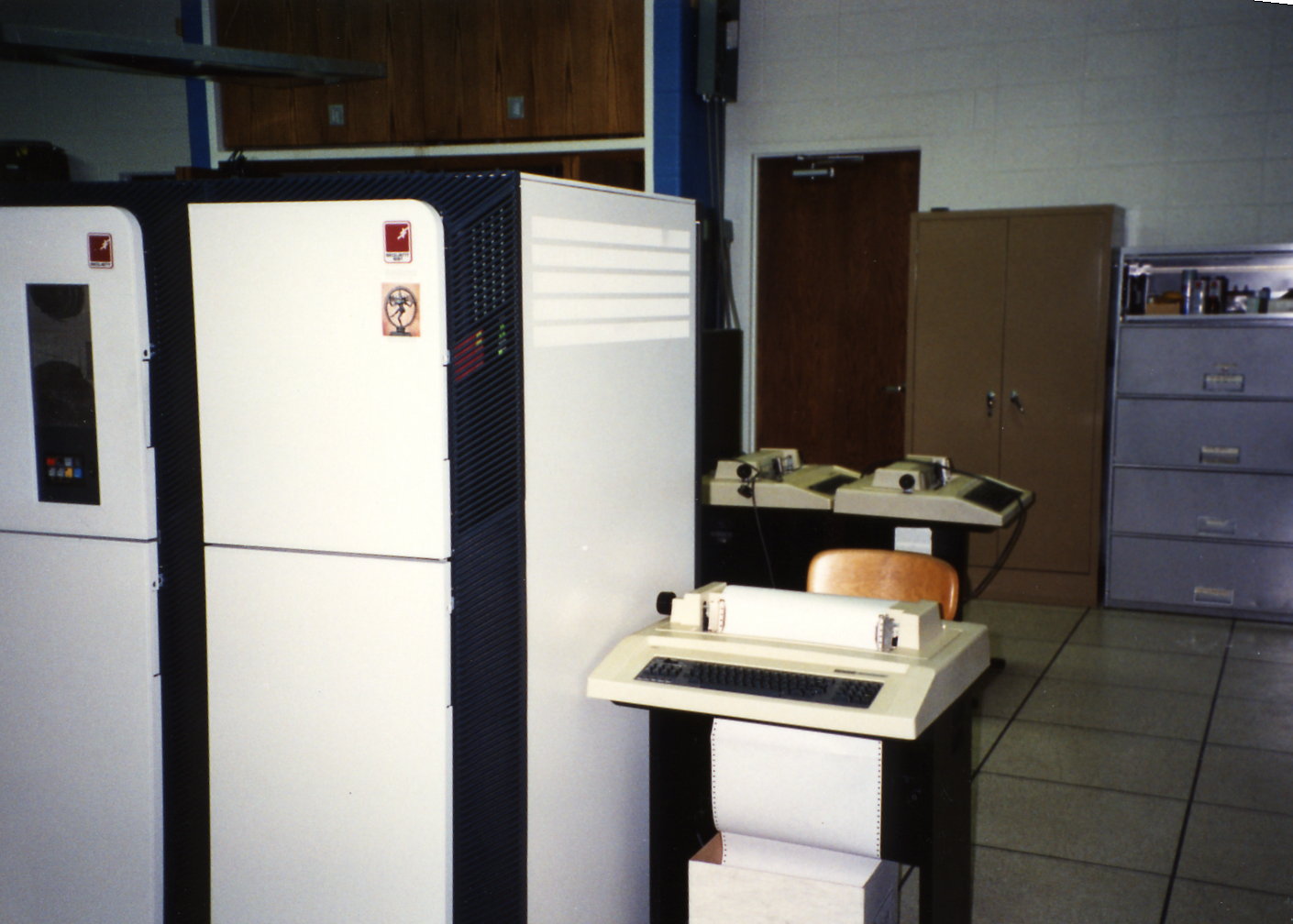 This is shiva.cis.udel.edu, a multiprocessor Sequent system running Dynix (a version of unix). We initially had NS32k processors in it, but we eventually upgraded it to i386 processors. Each processor had a green LED on the top right of the box that was lit when the CPU was running user process. It was always great fun to run a multiprocess compile (make -j 32) and make all the LEDs turn on at once! Above and behind shiva is the top of the wiring closet. 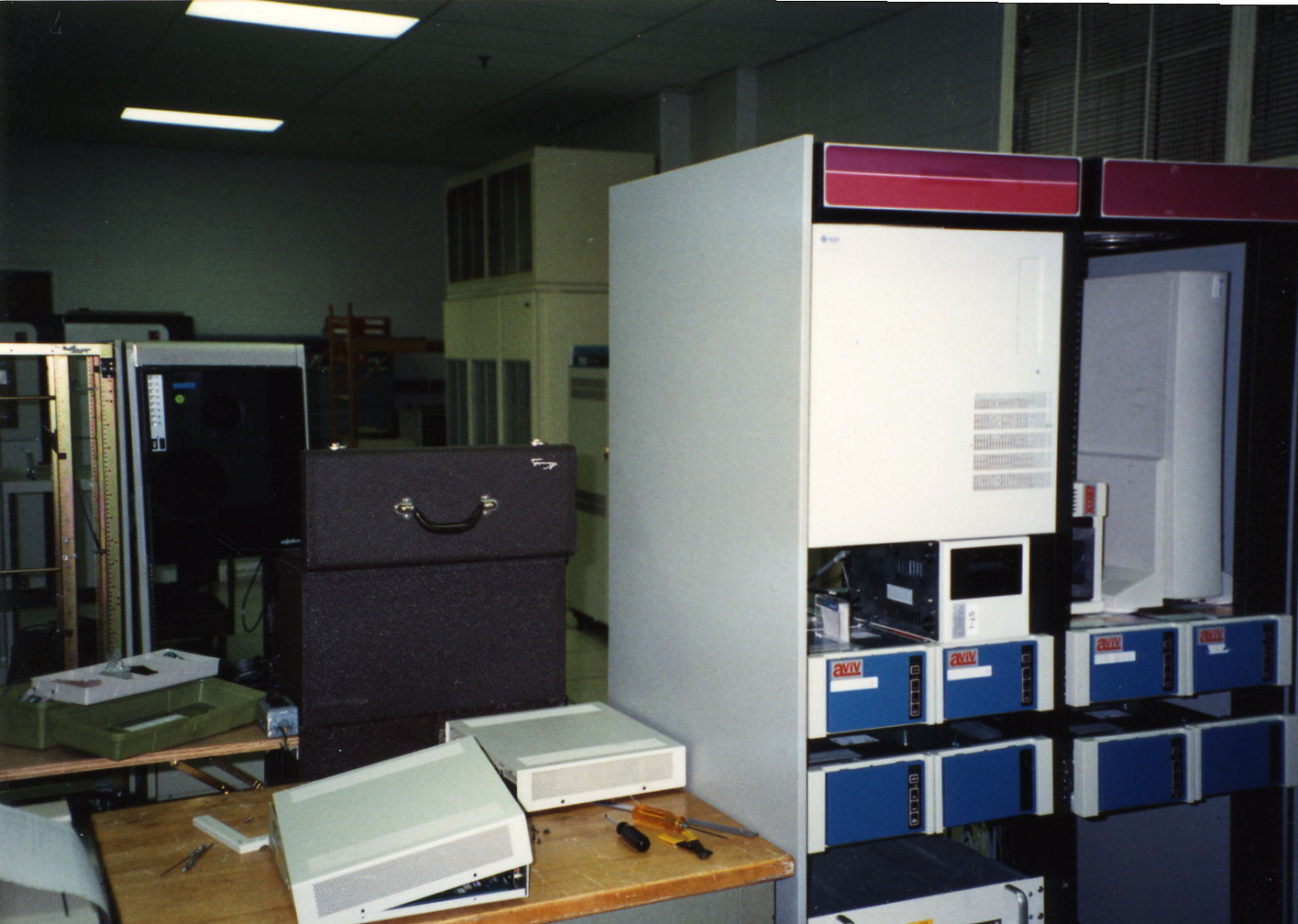 Last but not least, in the top left of the old PDP-11 racks on the right of the picture we have snow-white.ee.udel.edu, the first sun fileserver in the lab (the blue boxes below it are disks). (The vertical pizza box system to the right of snow-white might nigel.ee.udel.edu?) In the background behind snow-white you can see dewey.udel.edu and one of the EDPAC HVAC units that cooled the room. Behind the EDPAC, in the back corner of the room, is the rolling yellow scaffolding we used to run wires and change burned out overhead lights with. You can also see the front of shiva on the left side of the picture, behind the dead 9 track tape drive.